The November All Point Bulletin is out now and I see that there are a bunch of “Letters to the Editor” about the new library.  I hope that we have not lost track of the actual existence of facts, but I do note that the two letters in opposition are sort of fact-challenged.  So, here’s an attempt to address that.

Stan Riffle writes with great concern about the Park and Rec District taking on too much debt.  This suggests he doesn’t grasp the difference between a bond and a levy, which you would think he would given that he is a Commissioner at the Fire District.  A bond is debt; a levy is income.  So, the one-time levy is not debt, not something that has to be repaid, not now, not next year, not ever.   The levy will increase property owners’ taxes by, on average, about $100 for one year.  If the levy passes, property owners will pay half of their share of the levy with their first tax installment in 2017 and the other half will be paid with the second installment in 2017.  And that’s it.  No more levy payments, no debt to be paid back, no change in the Park & Rec debt level.  And there will be a new library, significantly increasing the District’s asset values.

Linda Hughes takes the position that a library is not important enough for taxpayers to pay a million dollars.  The most recent cost estimate is not a million dollars, nor even $900,00 as Mr. Riffle asserts, but $840,000.  This includes a substantial contingency fund for the unknown unknowns. The known unknowns have apparently already been resolved during the permitting process: we will not need an entirely new septic system, nor additional parking, etc.

Perhaps Ms. Hughes also thinks that $840,000 is too much for the taxpayers to pay for a new library.  But, of course, nobody is asking the taxpayers to pay $840,000.  They are being asked as a group to pay up to $300,000, 35% of the cost.  The remainder of the cost is covered by donors who have already contributed $540,000+ to the Friends of the Point Roberts Library for this new library: some of them property owners, but also residents, their relatives, summer visitors, local businesses, Washington philanthropic foundations, and businesses from outside the Point.

The Friends asked for and accepted these donations to reconstruct the Julius Fire Hall into a new and appropriate for decades to come library, and that is what the money is to be used for.  It is not a gift to the Park and Rec District to spend as they want.  The Friends of the Library are saying to property owners in Point Roberts, “We will pay 65% of the costs of the new library.  Will you pay the other ⅓?  Will you look that big gift horse in the mouth?”

Those are the facts of this levy request.

Judy Ross, for The Friends of the Point Roberts Library 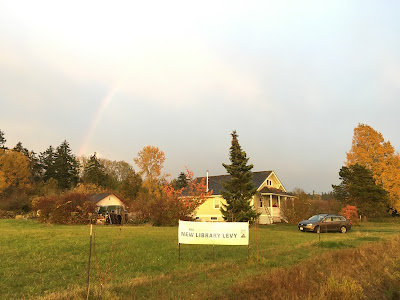 There's a sign urging folks to vote for the levy down near the intersection of APA and Tyee.  Both today and yesterday, rainbows appeared above it.  Think it's a sign from above?  Hope so; ballot came in the mail today.  Two more weeks to speak to friends and neighbors, encouraging them to vote Yes on the levy.  We need 60% of those voting to approve it.
Posted by judy ross at 7:13 PM No comments:

Levy on the November 8 Ballot

From the All Point Bulletin, October 2016

From the beginning, we’ve talked about remodeling the Julius Firehall for a new library.  That’s how the architect described it in his original plans: most of the outside walls and the slab would be maintained, although there would be a new roof and an entirely new inside.  The footprint was not expected to change.  People might reasonably think that the final cost is high for a remodeling job.

But, the original planning was 5 years ago and in the interim, a radar machine discovered that half of the slab would have to be replaced and the other half would need remediation.  The County decided that a new septic tank would be needed; we may need more parking places.  These have all increased the original estimate.

Five years of inflation have also increased the construction costs, especially.  Two years ago, our Whatcom County Executive told me we’d be lucky to get the project in then at under $325/square foot.  The current estimate is about $336.  There’s a lot of building going on in Whatcom County and further south, which has put considerable pressure on building costs even when overall inflation is not that high.

A public building project (and this library is a public building, owned by the Park and Recreation District) must be put out to competitive bid with the contract going to the lowest bidder.  That means the low bidder could be cutting all kinds of corners to increase his profits.  To counteract that inclination, the county has many requirements for public construction standards that are not imposed on private construction.  For a private job, the private owner looks out for his own interests; in a public project, the county looks out for the public whose money is financing the project.  That extra scrutiny increases costs, but minimizes the chance of shoddy construction.

And, finally, a public building is meant to last.  You build a home, you may expect to live in it for 20 years, but you’ll probably be doing a lot of maintenance, repair, and remodeling during that time.  A public building needs to last longer than a house.   The building materials need to be more durable and thus will be more expensive.  The Community Center has been around for 70 years and has had very little major work during that time (although some has been necessary over the past two years).  The new library will last, too.  Not forever, but long enough so that the community will not be needing to raise more money every 5 or 10 years to repair or replace elements.

It’s part of our gift to the future: a library that lasts, as we have received from an earlier generation a Community Center that has lasted.

From the All Point Bulletin, September 2016

WHAT’S HAPPENING WITH THE NEW LIBRARY?

The short answer: lots happening, but nothing that’s very visible. There are two strands, though.

First, the funding line.  The Friends have stopped actively raising funds, although we still receive and gratefully accept donations.  The Park and Recreation District has placed an “up-to-$300,000” levy on the November 8 ballot.  The reason for that “up-to” phrase is that by the time of the actual vote, we’ll have a much more solid idea of the actual costs.  But the best estimate now is that to move to construction, we’ll need no more and perhaps less than $300,000.  The total estimate also includes a 10% contingency, so the budget takes account of surprises.

Second, the construction line.  We have final design drawings and a final budget estimate.  We began the permitting process in July.  That is an ongoing process, but we are pleased to report that the County has accepted the current septic field, but will require a new septic tank.  That is a small cost increase; requiring a new field would be a much bigger increase, so we are pleased with that outcome.  In addition, we are not required to do any wetlands mitigation.  Further, it looks like the issue of additional parking spaces will be resolved in our favor. We expect the rest to go through pretty routinely, but with permitting you never know.  Stay tuned.

That’s what’s happening.  We’re working on a “Vote Yes on the Levy” campaign; the Park District will be getting ready for construction bidding.  It’s a big second stage.  We’re glad that you’ve been with us so far, and hope for your continued support.

Judy Ross
Friends of the Point Roberts Library
Posted by judy ross at 12:09 PM No comments: