Last night's concert attracted an almost full house at the church and provided a spectacular evening of music for the 80 or so attendees.  Michael Munro (on piano) and Liam Hockley (on clarinet) nearly wore out their instruments respectively, giving us all they had, it seemed.  I don't know that I'd ever heard Berg played before, but I've certainly heard Brahms, and never like this.  A truly impressive experience.

In addition, their performances drew a wonderful donation response from the audience: $2,500 which will be matched by a matching grant for a $5,000 evening.  We are so grateful to these young musicians for their generosity toward our community, and to all those who generously donated last night.

And special thanks to Margot Griffiths, who was the overall organizer of the event, and to Lucy Williams who contributed especially to the early planning but was always there for us when we needed advice.  And to the Church which provided the venue.  I bet the service this morning was infused by the spirit of last night's splendid music.
Posted by judy ross at 1:19 PM No comments:

The Great Community Indoor Yard and Baked Goods Sale last Saturday was a great success all round.  The New Library Fund had several tables worth of life's objects and we were joined by others with their own goods.  The attendance was terrific.  My estimate would be somewhere between 200 and 300 people came by (but I have no experience in crowd estimating).  It was pretty steady throughout the six hours and people seemed to be having a good time.  The baked goods and the produce pretty much all went away, and the object goods were also more gone than not by 4 pm, it seemed to me.

By the last bell, the New Library Fund had gained over $1,500 (overall total is now $264,000).  We have several additional items that are out on trial so that number might increase by some.  And we are looking to sell some of the larger objects we still have on P-I or on Craig's List in Vancouver.

We owe thanks to a lot of people who made this day happen:

--Judith Wolfman, who did the overall organizing for the event, ably aided by her crew including Peter Leritt, Don Falk, Margot Griffiths, and Ed Park.

--Kandy Harper, who rounded up the bakers and then managed their excellent baked goods.

--Phyllis Van Sandt, Ron Swalling, and Armene Belless, who worked tirelessly throughout the day, making sure that traffic moved reliably and that goods did too, and that we left the place the way we found it.

--Carol Clark and Carol Fowler, who managed their own tables and then generously gave all their proceeds to the Library Fund.

--Naomi, Andrew and Acadia of the Point Roberts Coop; Heidi Baxter, of Lily the Llama's Garden; and Rhiannon Allen/Arthur Reber who raided their own garden  to bring us all beautiful summer produce even though it is clearly fall.  The beet greens were a particularly wondrous treat for the fall!

--Mark Robbins, who managed the arrangements for using the Community Center

--The other Vendors who joined us, including Barb Remple, Janet Wheeler, Theresa O'Neill, Louise Cassidy, and Nicky Hockley.  It was a pleasure to work with them.

--And, finally, everyone who attended.  It was a lot of fun and we received more than one request to do it again soon.  Probably not very soon because we are going into the winter months now.  But it surely merits being done again.  It was a real community event!

Judy Ross, for The Friends of the Point Roberts Library

Yard and Bake Sale (and Produce, too) Saturday

Just a quick reminder that the Community Indoor Yard and Bake Sale at the Community Center startstomorrow/Saturday at 10 am.  And the doors close at 4 pm.  We set up this afternoon and there's a ton of stuff, any one piece of which might be just what you are looking for: 2 kids' bikes, bench saw, mitre saw, microwave oven, unusual glassware and dishes, hummingbird feeders, 2 baby rockers, CD's, a tent, a set of golfclubs/bag/cart, clothing, a christmas tree and a christmas wreath, hardware and tools (and tool box), an inversion table, a table fountain with polished rocks and an entire table devoted to red things, and another table devoted to free things.  All those things...and more.

Also a table crowded with the baked goods from Point Roberts' best bakers: sweet and savory breads, cookies, brownies, cakes.  And tomorrow, the produce people will be getting their contributions in: fall produce from the Coop and from Lilly the Llama's garden.

Please come by, if only for a look, a hello, and a cup of tea! 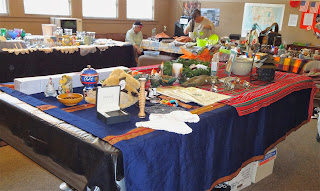 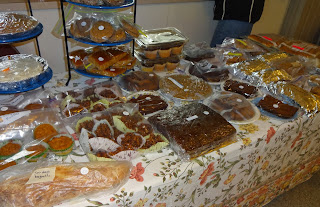 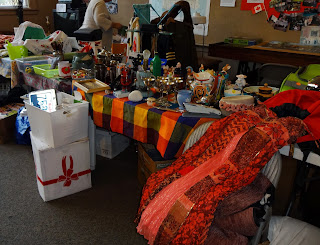 We've scheduled two events for October to get us through the beginning of the rain and the grey and the wet.

--October 12, 10-4 pm, Community Center.  We're sponsoring an Indoor Yard and Bake Sale at the Community Center.  The Friends will have a few tables with Yard Sale Goods that we acquired from various places over the summer (you need a bench saw or a chop saw, e.g., or a new set of golf clubs with case and cart), and with a few more tables with lots of baked goods that may come be the star of your Canadian Thanksgiving Dinner on that weekend.  Or, if you're not celebrating Canadian Thanksgiving (and why aren't you?  Be Thankful for Canada, too), you may need treats for your own weekend dinner celebrations.  And other people will have tables of stuff, too.

The point of this event is to allow us to extend the good feelings of the Saturday Markets for yet another time before the winter comes upon us all and sends us to our houses or to warmer climates.  Tables are available to anyone who wants to sell stuff ($5/table fee).  But you have to reserve a table ahead of time so we know we have enough space available.  Call me/Judy at -3180, or email me at judywross at gmail.com.  We'll make some money for the new library in the process, but other folks will have their own projects to make money for, and that's good too.  Be a seller or be a buyer, but join us, please.

--October 19, 7 pm, Trinity Lutheran Church. Classical Concert: Professional musicians Michael Munro (piano) and Liam Hockley (clarinet) will be performing Brahms and Berg, in a concert to benefit the new library fund.  Admission by donation (all donations will be doubled by a special matching fund).  For information, contact Margot Griffiths, -2970.

And you were wondering about our current donation totals?  They are $258,000.  We need another $42,000 before the end of the year, so if you haven't made this year's donation to the new library fund, it would be a very good time to do so.  Make your check out to the Whatcom County Library Foundation, write 'P.R. library fund' on the memo line, and leave it at the Library in the donation jar.  As far as I know, no one ever felt bad about making a donation to a library, and most everyone feels good, when that library comes into existence, knowing that they had a part in bringing it to life.  If you can do so over the next two months, please help this library come into life!

--Judy Ross, for the Fundraising Committee