Support from Point to Point Parcel!

In the mail today, a donation check from Point to Point Parcel for $500!  If you should happen to be in their location, please to tell the owner and/or his employees 'thanks' for their support.  Business support is going to be critical for getting the new library built and it's very nice to see businesses stepping right up when asked.
Posted by judy ross at 9:25 PM No comments:

First Book in the Sculpture Stack

At the Annual General Meeting on the 13th of May, Judson Meraw provided a view of the book stack sculpture that he and Tor Baxter are building to stand in front of the Julius Firehall, the home of the new library-to-be.  They had five books to show, but none yet painted.  Today, they are all five painted and the first title was being put on the spine by Jack Lubzinski.  They expect the first five books, all finished, to be on site and in full public view by mid-June.  Eventually, there will be 15 such books in the stack, each with a different title.  More books will appear as more money is raised.  At today's counting, we have raised over $162,000, with five four $10,000 contributors now putting their names in the Founders' Circle.  That's almost 1/3 of the way, which is to say Five Big Books worth!
Posted by judy ross at 10:56 PM 1 comment:

On the 13th of April, the Friends of the Point Roberts Library held its Annual General Meeting at the Community Center.  It was a time to meet the new Whatcom County Library System Director, Christine Perkins, who has been chosen to replace Joan Airoldi.  She started work today (Monday), so it was particularly nice of her to inaugurate her new job by visiting us out on the far reaches of the System. (I think of us Uranus or Pluto, maybe.)

We welcomed some new and old officers to the Board of Directors (Barb Wayland (President), Louise Cassidy (Treasurer), Heidi Baxter (Secretary), as well as Bill Liaskas (rep from the Support Committee), Judy Ross (rep from the Fundraising Committee), Mark Robbins (rep from the Park and Recreation District), and Kris LoMedico (rep from the Library System).  We approved some changes to the By Laws, and learned that we are now not only a Washington State non-profit corporation, but on the edge of becoming a 501(c)(3) organization (charitable tax exemption) under federal law. 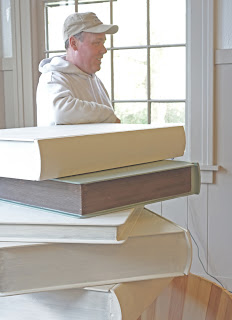 Attendees obligingly paid their $5 year membership dues for the upcoming year, and participated in a random draw in which 10 of them received a hand-made "support the new library" bookmark.

Two big features of the day included, first, the Book Sculpture, which will stand in front of the Julius Firehall very soon to illustrate the fundraising progress.  This project which is mostly the work of Tor Baxter and Judson Meraw features a large flower-pot-like base upon which will rest a stack of giant books, the stack growing larger as the donated funds grow.  Judson brought their initial work to give everyone an idea of what it will look like:  The books will be painted, they will be different sizes, the top will be an open book or maybe a monitor, the books themselves may turn, it will be a permanent structure for the library, there will be a rod of some sort behind it that will have numbers on it.  They've been working on this for just a couple of months and expect it to be on site by summer.  Enormous thanks to them!  We live in a community of artists... 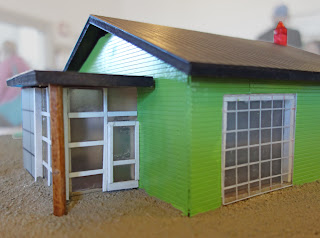 The second exhibition was the presentation of a model of the new library itself, built by local high-school student Alex Tersakian.  It's not clear where this will find its home in the near future, but it will definitely have a home in the new library when it is built.  If there are miniaturists in the community who would like to provide some park benches, get in touch with us!  Great work from Alex!

Finally, there was an explication of the fundraising plans for the rest of this year.  We currently have a new one-year $100,000 matching grant to encourage ten individual or business donations of $10,000: the donors will become members of The Founders' Circle, and the grant will then match those donations.  The owners of the CanAm Petroleum station are the first Founders' Circle Members, Dorothy and Darrel Sutton are the second, Ed Park and Judy Ross, the third.  There's still room in the Circle.  Give us a call!  Our current donation fund total is $140,000.

In May, the Friends will be sponsoring a call to the members of this community to each give $20 to the new library fund.  Again, we have a matching fund that will match the first thousand contributions of $20.  If a thousand supporters donate $20 each, the donation fund, with the match, will rise by another $40,000 in one month.  The new library is something that will belong to all of us and we want everyone to have a chance to participate in that sense of belonging.  Some people, some businesses may be able to give more, but everybody who knows and feels the importance of having a community library that is adequate to the needs of the community can give $20, if only this once.

To contribute, take your twenty to Sterling Bank any time in May that it is open.  The tellers will record your donation and deposit it in our account.  And they'll give you a button too.  (button photo on the left.)  Every name that is recorded will then be written in the Donation Book record that we are maintaining for this project.

Thanks to everyone who came on Saturday and to everyone who will join in the coming months.  The library gives to all of us and it is a privilege to be able to give back to it.

--Judy Ross, for the Friends of the Point Roberts Library

Note for Your Calendar

April 13, 2013 will find you, we hope, at the Community Center for the Annual General Meeting of the Friends of the Point Roberts Library.  Beginning at 4 pm.  A lot of things have happened over the past year since the last Annual General Meeting and more are happening as I write: e.g., we were told yesterday that the owners of the CanAm Petro Station, Tim McEvoy and Bruce Gustafson, are contributing $10,000.00 to the New Library Building Fund.  That is a way to begin spring!  We are so very grateful to them.  They have been big supporters of the community in other areas and we are delighted to have them supporting this project, as well.

In general, we have about $130,000 right now raised for the new building.  And more to come as we have some large pledges for donations, including matching gifts, through 2013, already in writing.

In addition, the Friends is transforming from an Association to a Washington Non-Profit corporation.  And then on to a 501(c)3 organization at the federal level.

So come to the meeting and find out what you can do to help maintain the momentum for the new library.  If you have not yet made an individual donation, this would be a good time to do so.  As we go forward to foundations and government agencies, one of the standard questions is whether our supporting group (that would be YOU and the others on this mailing list) have contributed to the project.  All members of the Board of Directors have done so, as well as all members of the LIC (the fundraising group whose formal name is the Library Improvement Committee).

Do plan to come to the meeting.  Those of us who are organizing the fundraising (you and all the rest of the community, of course, are providing the funds) need to talk with you to make sure we're going in the direction that you want.

Thanks.  Judy Ross for the Library Improvement Committee
Posted by judy ross at 12:11 PM No comments: