Starting September and Then Some

I am in deep debt to this blog.  Somehow, I let an entire month go by without getting anything posted.  Partly that was because the summer was so frenetic, but it was not because we were without activities and news.

1.  We finished up 8 Community Market sessions, each one bigger than the one before, not only in terms of money raised but in terms of people involved.  By the end, we not only had the "Stand and Be Counted" donation table, but also a Produce cart, a Baked Goods stand with fresh bread and home-made cookies, and a couple of tables with elegant cast-offs/recycles.   Over the summer, this mix of goods produced several thousand dollars worth of donations. 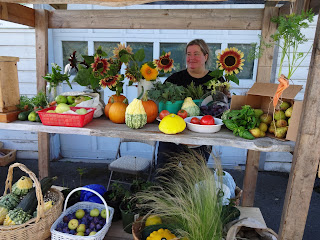 2.  We did three outdoor movies at Brewster's (and we thank Brewster's for making these movie nights possible) which produced about $2,000.
[update: + 2 days at the Arts and Music Festival, for another $900.]

3.  We received donations from Snider and Lynn Vick of the Shell Station for $1,200; over $600 from Auntie Pam's store from her charity consignment clothes program; $3,000 from Nielson's Building Center, and $1,000 from the All Point Bulletin.  In addition, we received donations of $1,000 from Trinity Lutheran Church, $500 from the Crystal Beach Homeowners Association, $500 from the Maple Beach Property Owners Association (and another $190 from various Maple Beach group activities), $190 from the Joke Contest, $260 from the Latin Jazz Concert (via the Church), $500 from last week's Silent Auction.

4.  We have received numerous individual donations in response to the brochures sent out in July, including many in the hundreds and several in the thousands of dollars.

5.  A hundred+ people signed "Piece of the Library" peace flags that now fly on the east side of the Julius Firehall.  See who signed them and who made exquisite little drawings when you come by that parking lot. 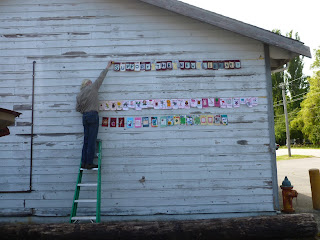 6.  Almost 400 people donated $20 each to the Stand and Be Counted Campaign.  All those donations were matched, which produced almost $16,000 to our fundraising totals.

7.  The Book Sculpture began to take shape.  When done (and when we have gathered in all $500,000), there will be 15 books in that stack!  Our thanks to Tor Baxter, Judson Meraw, Jack Lubzinski, and Bob Struthers for their continuing work on this special project.  It measures our success! 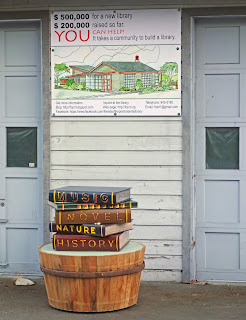 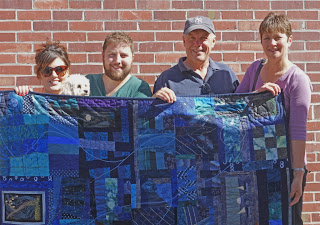 (Quilt winners Sylvia and Ken Thomas (on the right) and family members Miles, Kayla, and Stella the dog.)

9.  And that gets us to a September 13 total of $257,000.  It's been a good summer for fundraising and we want to thank everyone involved: everyone who gave us produce and products to sell and who bought them, who attended events, who held us in their prayers and extended their good wishes to this wonderful community project, who made donations, who gave time and energy to get us to this point.  Our most grateful thanks go out to the 600+ people who have made this all happen over the past 20 months.  You are the ones who are making this new library happen!

I hope I have not omitted anyone/anything, but if so, I'll come back and edit if you let me know my omissions.  And I'll be better at posting what's happening as the fall comes in, I promise.

Judy Ross, for the Friends of the Point Roberts Library