EVERYONE IS WELCOME TO ATTEND!

HOW CAN YOU HELP?

REFRESHMENTS, DOOR PRIZES, AND A CHANCE TO TALK WITH YOUR NEIGHBORS ABOUT BOOKS AND READING AND LIBRARIES

For Information, ask the Library Staff or contact Judy Ross, x3180.
Posted by judy ross at 5:25 PM No comments:

Just How Well Is This Going?

Meeting 1, March 9.
Last Wednesday's special meeting of the PR. Park and Recreation District turned out to be held in a driving rainstorm, although everyone was safely indoors by the time the meeting began.  About 40 stalwart souls showed up.  It began with three of the District Commissioners describing their support for the library and for putting a levy on the ballot to cover the gap funding.  Community members in attendance were then asked to express their views about several matters, including the levy amount, the "build-to-lockup" possibility, and the "renovate-or-build-from scratch" choice.  About 15 people spoke over the hour-plus time that remained.  Two of the issues stood out: almost all the speakers spoke in favor of a ballot levy this fall, with advice to make it enough so the building could be built well and would grace and serve this community for many decades to come.  Many speakers spoke very forcefully, following Tom Bradbury's lead, in favor of demolishing the Firehall, and building the new library from the ground up, including raising the foundation a couple of feet.  A few people endorsed the build-to-lockup strategy, a few opposed, but most didn't mention it.

Those of us who were there from the Friends were most pleased with the strength and the level of public support.  There may be new library opponents out there, but they were either not at this meeting or at least were not willing to raise their voices.  The meeting ended with the Park and Rec Commissioners committing themselves to sorting out the many issues that need to be dealt with over the next few months and to begin establishing priorities and making decisions.  Yes, that went well, we thought.

Meeting 2, March 14.
Less than a week later, Monday, March 14, the Commissioners met again at their regular meeting and began, surprisingly, not to follow up on that promise.   Commission Chair Linda Hughes, who had not given any of her views at the special meeting the previous week, announced that (1) she would not support a levy for further library money under any circumstance, and (2) that not enough people had spoken at the meeting so more people needed to be heard from and she would conduct a survey, via the internet.  She acknowledged that a levy was still probable, because hers was only one vote, but she explained that she didn't see why the library couldn't just be built with the money that the Friends had raised in the community.  (This was certainly not what the public had said at the first meeting: several speakers spoke firmly in favor of an even larger levy than was on the table exactly to ensure that there would NOT be any corners cut in the building process.)

The remainder of the discussion at the second meeting, the one on Monday the 14th, was largely at cross purposes with the earlier goal of setting priorities.  However, it was clear that the Commissioners agreed the building should be seen as a 'start over' and not as a renovation.  But somehow, from that point on, magical thoughts began to dominate the discussion.  Perhaps, if the building were to start afresh, it could be much cheaper.  Perhaps if it were rectangular without any "bump outs" to increase the size of the children's area or to accommodate a multi-purpose room large enough to be a room (both features in the original design), or if it had fewer (unidentified) architectural amenities, or if it had a second floor, or if it looked like Brewster's Restaurant, well, then it would be much, much cheaper.  And it could be cheap and still be beautiful.  Slowly, several of the Commissioners seemed to be working themselves around, in some unclear way, to be building a different library, not the one that the Friends had been raising money for over the past 4 years, but a design that would be really inexpensive, even though it was a public building and had to meet the requirements for public/commercial buildings that are not required for private houses.  (Be advised that the Friends has already paid almost $40,000 for the current design, engineering, and architectural drawings.  Well surely, some thought, it wouldn't cost much to re-do them.)

This air dream that it could all be done much more cheaply became totally pervasive.  Perhaps the Park District could just sell the building at a discount to the Friends and then the Friends could take on the construction as a private party, which would enable the work to be done by volunteers and with no requirement to meet county codes for public buildings and then it could be given back to the Park District at completion.

And then the discussion ended for lack of time and the plan of action was to get that internet survey conducted and to ask the architect about (1) demolishing the building and laying a new and higher foundation to help drainage, as well as (2) how much it would cost to design a new building that would be much cheaper.

Well, no, I don't think that went very well.

If you are concerned, I urge you to make your views known through the survey, by writing to the Commissioners, and/or by attending the Park and Rec District's next meeting, the second Tuesday  Monday in April (April 11), 7 pm at the Community Center.  In addition, the Friends of the Library will be holding its Annual General Meeting on Sunday, April 3, 2-4 at the Community Center.  I think you might want to be sure to attend that meeting.
Posted by judy ross at 2:01 PM 3 comments: 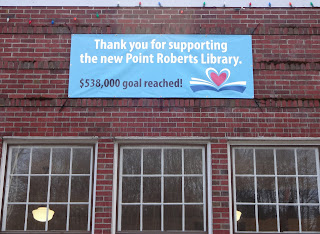 The Park and Recreation District is holding a special public meeting to hear what the community has to say about raising the final funding for the new library.  The District is committed to raising the so-called "Gap Funding" (the $159,000 difference between our original goal and the current estimate of total construction and associated costs).

Those of us who organized the fundraising are endlessly grateful to everyone who has helped put that $540,000 in the bank.  There are over  a thousand of you, plus hundreds more who have contributed in other ways.  We thank you AND we need your help one more time: at this meeting.

There have, of course, always been a few people here who didn't support the new library.  But we need their numbers to be dwarfed at this meeting by the many who have shown in every way possible that this library is important to them, their families, and their community.  We need you to make sure that the Park and Recreation District Commissioners know that you expect them to move ahead, promptly and effectively, with the extra funding.

Below is a brief information sheet with an outline of the issues that the meeting will address.  If you want more detailed information, let me know (judywross@gmail.com) and I'll send you a 3-page sheet, or you can pick one up at the library on Tuesday or Wednesday.

The meeting is at 6 pm, Wednesday, March 9, at the Community Center. Looking forward to seeing you there.

--Judy Ross, for the Friends of the Point Roberts Library

GETTING THE NEW LIBRARY BUILT

Who raises that extra money?
The P.R. Park and Recreation District

What does that mean to me as a taxpayer?
Two options for construction timing:
Posted by judy ross at 12:25 PM 1 comment: