The Point in the Snow

This was taken a couple of days ago, but it's even more now.  The snow, by contrast, is even less.... 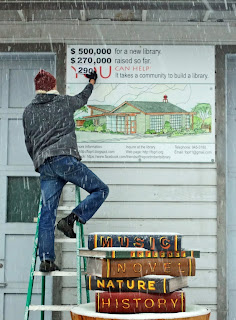 A Big Christmas Gift for the New Library

If this program works as we hope, that $5,000 will easily get us very close to our $300,000 goal, and we are very grateful for the market's generous offer.  I hope you, too, will generously be willing to roundup when you get your chance at the market.  I was in line today with 5 other people and every one of them (plus me!) said, "Yes.'  When I thanked them, one lady replied, 'Who doesn't like a library.'  Who indeed?

The first day of this program was Tuesday, 17th December.  I'm not sure how long the management is going to have it run, but over $200 was raised on Day 1.  So I hope you will be able to join the other shoppers in these small individual contributions that turn into large aggregate contributions.  Also, maybe consider thanking those who say 'yes'  when you are in line with them.

Beyond that, please thank the checkers.  They are the key to this working.  There are signs all over the place, but at this time of year, people are sufficiently distracted to miss an additional sign.  Furthermore, it is one more thing for the checkers to take care of.  I'm hoping we'll all be thanking them for their willingness to go that extra step.


Judy Ross
for the Friends of the Point Roberts Library

Well, we're almost a week out from the craft fair, which was busy enough, but probably not as well attended as last year.  Not such great weather and too great lines at the border, we think.  The New Library Fund is about $1,500 richer now between the selling of donated goods and the selling of Library Donation Cards for Christmas Gifts.  And that is matched, of course.

And then we have also received another half dozen or so generous gifts, all matched, as well. (Including a one thousand dollar donation from our sister committee, the Support Committee of the FOPRL.  I would high-five you if I knew how to do it in writing!)  All that is bringing us to about $290,000, I think.  So we are getting pretty close to the goal for the year, although we are still needing a little push.  If you haven't yet made a donation for this year, we'd be very happy to hear from you in these next two weeks: all donations matched, you'll recall.  And $300,000 the goal.

I want to take this post also to thank all the people who made donations to the library table: Pat Czuszor, Sandy Holland, Carrie Smith, Phillip Joseph, Madrona Yoga Studio, Justin Morgan, Ed Park, Esther Rosenthal, Heidi Baxter (who sold over $200 worth of her needle felted sheep for us!), Laura Vestanen, Joanna Harris, Joan Linde, Linda Bruce, Bev Mar, Terry Rey, Judy Ross, and probably two or three other knitters whose names I never got.  That is what made that $1,500 in sales possible.  Thanks to all of you for your great generosity in helping to make this library a reality. 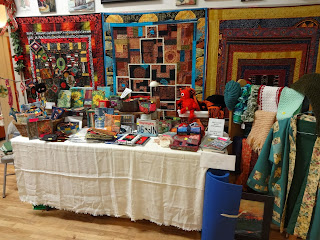 And a second very big thank you to Margot Griffiths, Maxine Clark, Jane Donaldson, and Louise Cassidy, who helped to keep customers happy throughout the weekend.

Hope your Solstice and Christmas and everything else in these next two weeks are merry and bright, although I personally could pass on the snow.  Next time, 20014.  Upwards and onwards!

Judy Ross
for the Friends of the Point Roberts Library
Posted by judy ross at 3:43 PM No comments:

Craft Fair Moves Us Along

This Saturday and Sunday is the Point Roberts Christmas Craft Fair.  There was a short, practice session on Friday night to make sure everything was working right, and it appeared to be.  Twenty or thirty people came to the trial and with 20 or 30 crafters about, as well, it was a nice crowd and there was cheese and crackers and wine, and singing and a little shopping, and lots of talking and comparing this year with last year and the years before that.

The Friends of the P.R. Library has a table at the Craft Fair, as it did last year.  It is covered with donations from local people who want to help make our new library appear as fast as possible.  I know most of the fiber arts people, so it is overly representative of fiber crafts, but we also have some other things, including a charming clock made from a Washington State license plate, and five sets of hand-decorated paper clips (you really have to see them to appreciate them), a yoga mat and four lessons at Madrona Yoga Studio, lots of exquisite small, hand-made leather wallets brought to us by my neighbor, and a passel of quilts, quilted things, and knit and felted things, including carrying covers for your new Kindle if you have one or are expecting to get one.  Also, Christmas tree ornaments that are one of a kind.

Despite the fierce cold, we hope you will be able to make your way to the Community Center (Saturday, 10-4, Sunday, 11-3) to see if something Christmas-y might return home with you.  Also, we have Christmas Donation cards through which you can give a gift of a library to the readers on your list; especially the local ones.

We are hoping that this event will help us get to the $300,000 mark that we expect to reach by the end of the year.  Because all the proceeds from our table will go to the Library Fund, the price of everything that people buy at our table will be matched by our year-end matching fund.  Come look, perhaps buy, wish us well, and wish the new library well.

Judy Ross, for the Friends of the Point Roberts Library